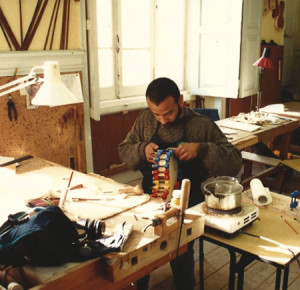 Jorge Bertholdo was born in São Paulo, Brazil in 1966 and live and work in Portugal since 1988.

In 1992/93 he study violin and bow making in “Escola Profissional de Arcos do Estoril” in Estoril, near Lisbon.

In 1993 he was invited to give assistance in violin repair and setup in a well known violin shop in Lisbon, dividing his time in the shop and in his personal workshop making repair and new instrument as well.

In 1998, thinking about what's make a violin different in quality from one to another, the “secret” could be in science. With that in mind he began himself in violin acoustics research (mainly reading papers in violin acoustics), and becoming member of CAS (Catgut Acoustical Society) and GAL (Guild of American Lutherie).

In the same year he participate in a 3 weeks lute making course in Sweden.

He moved to Porto in 2000, where continue working for a violin shop and on his own workshop.

In 2009, unsatisfied with the way his “every day” work, it's take to nowhere, he decided to seek for higher challenges, going back to the beginning and restart to make instruments at the same time he make more selective repair jobs, and take more seriously his self study of the violin acoustics aspects, and in 2014 become member of the VSA (Violin Society of America, which CAS is part of since 2004).